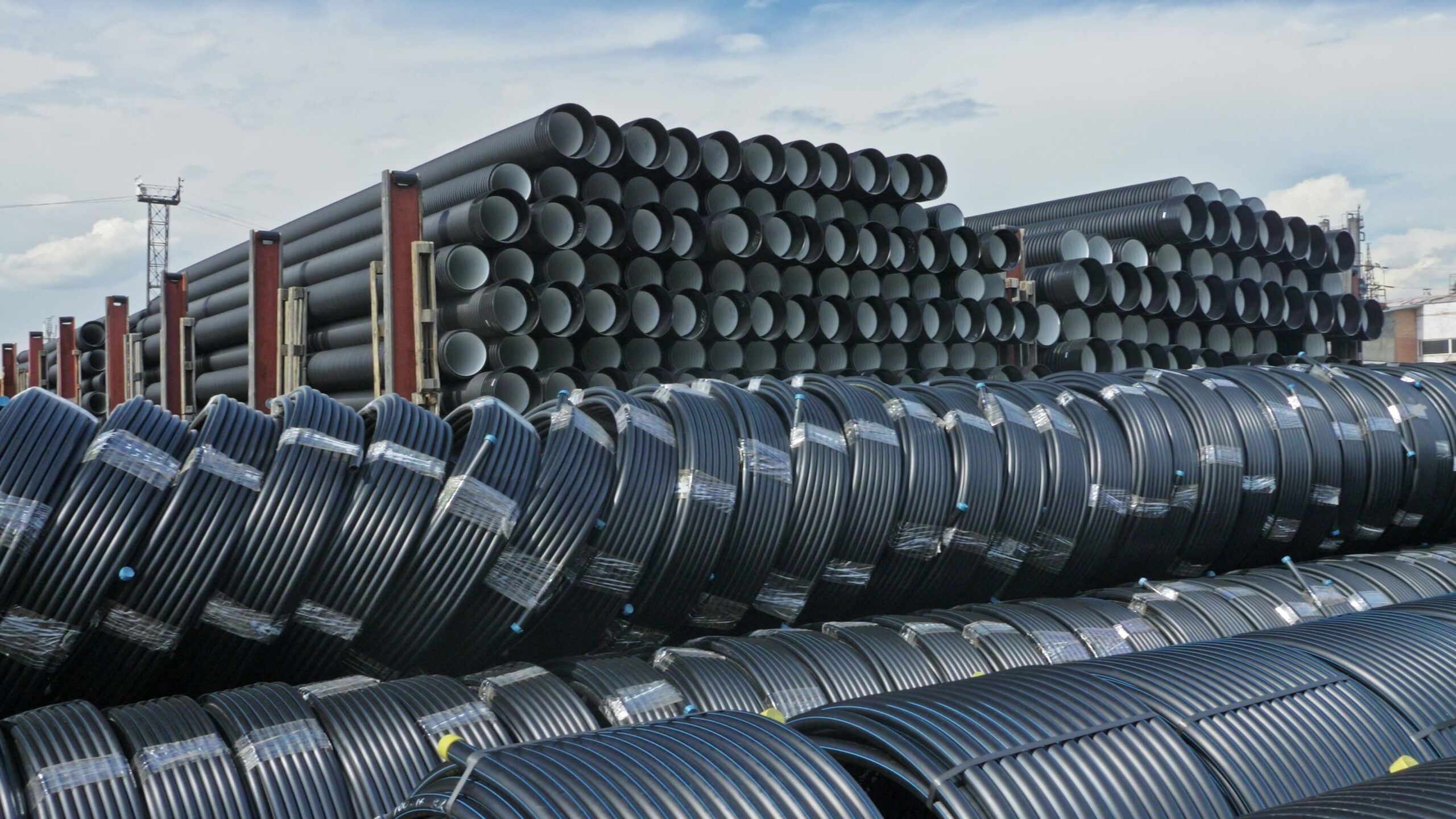 by Chirag Lodaya and Surbhi Soni

Plastic Pipe is a highly fragmented industry with large number of unorganized players. Due to commoditized nature of the product and low capital requirement, there are optically no barriers to entry. Moreover, there is high dependence on imports as more than half of the raw-material requirement is sourced from outside India. Given this, plastic pipe industry might not seem lucrative to any first level thinker. However, our deep dive into the sector suggests otherwise and we were able to gather some differential insights about this business.

Plastic Pipe is a unique industry. It has grown at a healthy rate of 15% over the last 10 years and has been the fastest growing segment in the overall building materials space. Despite being a fragmented market, the competitive intensity in this industry is moderate. Unlike other building material categories like tiles and plywood, players in this industry compete on quality and not merely on price. In addition, there is increased consolidation benefitting larger (many of them listed) players. Despite a challenging year where global supply chains were disrupted, large players demonstrated agility and emerged stronger.

Evaluating current trends and developments – imposition of ADD on CPVC resin, buzz around Jal-Jeevan Mission (hype or real potential) and most importantly what really is driving consolidation in the sector.

We believe the sector has long-term tailwinds and will have big winners. Our findings reinforce our bullish view on the sector.

The plastic pipe industry has seen unprecedented PVC price rise due to disruption of global supply chains, container shortages and declaration of force-majeure by large resin manufacturers. PVC prices have more than doubled and continue northward. Unorganized players faced both availability and working capital constraints. This led to market share gains for organized players. With the buzz around real estate revival, government infrastructure push, and exit of some players, prospects for the industry look bright which is reflecting in a near-term strong performance by listed players.

In this note, we deep dive into the sector to get answers to two basic questions:

Let’s start with the basics.

Plastic pipe is ~Rs. 31,000 cr. industry in India which has clocked a healthy growth rate of 15% over the last 10 years. As demonstrated above, it has outpaced other building material categories like tiles, paints and plywood and has been the fastest growing sector in the domestic building material space.

Process of manufacturing pipe is known as Extrusion. In this process, the PVC compound is fed into the hopper of an extruder machine where the compound is melted at high temperature and pressure. The molten plastic is passed through a die which provides a specific profile to it which is then cooled in a vacuum controlled water tank. The pipe is then pulled through a roller and cut into the desired length.

Fittings are specialized products that help in the installation of pipes. The process of making fittings is almost similar to that of pipe except that the molten plastic is fed into a mould where it is cooled and solidified into the shape of the mould.

KEY PLAYERS IN THE INDUSTRY

COMPARISON BETWEEN NATIONAL AND REGIONAL PLAYER

There are large number of local players and recyclers who account for ~35% of the total market. Our channel checks suggest that local players can charge much lower than national players by compromising on quality and cutting their manufacturing cost; Here’s how.

PVC compound which is 70-75% of COGS consists of resin, additives (calcium) and stabilizers (titanium di-oxide) which are required to be mixed in prescribed proportion to manufacture a pipe of a standard quality (Ideal proportion being 85:10:5). Additive (calcium) is 1/10th of resin cost. Local players manipulate the mix of PVC compound (60:35:5) to achieve low manufacturing cost.

However, they are not direct competition to large players. Pipes have a long replacement cycle and cost of replacement is extremely high as well. In other building material categories such as tiles and plywood, smaller players are competitive in terms of quality. In case of pipes, there is a noteworthy difference in quality and there is a brand value in the minds of consumers.

For example – For a pipe having weight of 750 gm, the price differential amongst the national players is insignificant to influence the purchase decision of a consumer as pipe is a small % of the total project cost. On the other hand, though a local player/recycler can offer the cheapest price but that comes at the cost of quality (500 gm vs 750gm) which is not acceptable. Hence, a price conscious customer may compromise a bit on quality (700 vs 750 gm) and shift to a regional player, but it is highly unlikely that he would move to a local player/recycler irrespective of how cheap the price is.

This means that due to significant difference in pricing as well as quality, by offering cheaper price local players do not pose any threat to national players. Hence, in our view the competition for a national player is restricted to another national player or a dominant regional player.

Large players have sourcing advantages as demonstrated below:

Unlike large players who enjoy 4-8% discount by procuring resin from Reliance or by directly importing from international resin manufacturers, small players procure resin from importers or distributors by paying a premium of 2-3%. Due to this, large players enjoy a cost advantage of 6-11% over small players. Small / regional players try to eliminate this differential by manipulating the mix of PVC compound!

As per our channel checks the recent rally in PVC prices has led to dual problems for smaller players – sourcing challenges (availability issues) and increased premium (north of 10%). Several players are facing existential crises.

Manufacturing pipes is simple and not very capital intensive, but fittings are different. Fittings require precision and significant investment in moulds which makes it capital intensive compared to pipes (~3x of pipes). The requirement to maintain large number of SKUs also increases the working capital in fittings. On the other hand, pipe is a fast-moving product and have higher asset turns compared to fittings. However, due to its specialized nature, fittings fetch much higher margin than pipes (~2x of pipes).

To summarize, both pipes and fittings are profitable businesses. In our view, higher share of fittings differentiates a company from its competition as it helps them to sell more volumes of pipes. And, a company can also earn Higher ROCEs provided scale is achieved.

Note: Unlike pipes, in other building material categories like tiles, plywood, and wires, there are no company-exclusive distributors. The companies directly sell to the dealers who are also the retailers.

PIPE – A BUSINESS OF SCALE

The common size analysis shows that pipe is a low value addition product as COGS itself is 65-70% of the sales. Pipe is a pass-through industry where any increase/decrease in raw-material price is passed on to the consumer on immediate basis. Also, majority of the other costs are variable/semi-variable in nature leaving marginal scope for operating leverage.

In this business scale and gross margin improvement are the only two key drivers for profitability growth. Gross margin is a function of change in product mix and manufacturing de-centralization. Let’s understand both the aspects in detail.

ndustry data suggests that there is striking difference in margins earned under each segment. Due to their specialized nature, fittings and CPVC fetch higher margins compared to other categories. Similarly, because of higher competition, companies earn lower margins in agri compared to plumbing and sewerage. Therefore, profitability of a company depends on its product profile and the segment it caters to.

HOW DECENTRALIZATION HELPS IN IMPROVING PROFITABILITY?

As pipe is a voluminous product, decentralization helps companies to reduce their freight cost and improve realization. In addition to reduced cost, strategic location improves their competitiveness with regional players and enhances their market-serviceability. We noticed that in last 5 years, large players have accelerated expansion and decentralized their business operations.

To conclude, we believe that these four attributes give a company competitive advantage over peers.

In India, CPVC is ~ Rs. 4,650 cr. market. Due to increased acceptability and application, the consumption of CPVC has gone up and it has become the fastest growing category within plastic pipes. Currently, India does not have CPVC capacities, and it meets ~95%+ of its compound requirement through imports. Large players procure CPVC compound from global manufacturers whereas China and South Korea were key source of CPVC compound for small unorganized players. Small players sourced cheaper resin from these countries and competed aggressively with large players on price. In a span of just 4 years share of imports from these countries had gone up 3 times from ~13% to 36%.

In order to curb import of cheaper compound, in February 2020, GOI imposed ADD on CPVC resin imported from China and South Korea. Due to this ~40% of imports have become unviable. This move has taken away the advantage of sourcing cheaper resin from smaller players and has made large players even more competitive.

THE BUZZ AROUND JAL JEEVAN MISSION

In the Feb’21 budget, GOI merged the ongoing National Rural Drinking Water Programme (NRDWP) into Jal Jeevan Mission with an aim to provide tap connections to every rural household by 2024. What caught everyone’s attention was the massive allocation of Rs. 55,000 cr. towards this mission (5 times the allocation of FY21!!). In addition to this, the Government also announced Jal Jeevan Urban mission which aims to provide water supply through functional taps in 4,378 statutory towns and sewerage management in 500 AMRUT cities. These two missions (rural + urban) combined mean that plastic pipes worth Rs. 11,200 cr would be required.  In a typical water supply project, generally HDPE and PVC pipes are required for last mile supply of water from distribution point to households. If the execution is right then undoubtedly, this creates an exciting opportunity for HDPE and PVC pipes.

Types of pipe required in a water supply projects

Because this time, it is possibly different!

Post- covid, a lot of regional players have moved out of the market as they faced severe challenges in sourcing raw material. Large players are willing to capitalize on this and they believe due to better manufacturing and distribution network, government tenders are more likely to flow to them. One of the large companies has already announced investments focused on Nal se Jal scheme, the other has talked about adding HDPE capacities. Thus, unlike past, we may see large players actively participating in the Jal Jeevan Mission.

This has been driven by –

PVC prices have breached all-time highs. The recent rally in PVC prices has aggravated the struggle of small players. Sourcing challenges have moved many small players out of the market. Large players who have secure supplies have not faced any severe disruption yet and have been able to pass on the price rise.

(b) GOODS AND SERVICES TAX (GST)

The above example of comparison with tiles confirms that scope of tax evasion in pipes is far lesser than other segments like tiles given than 75% of COGS is tax paid.

Industry data confirms the consolidation thesis. The share of top 5 players has doubled in the last 10 years.

After a comprehensive study of the industry, analysis of various aspects of the business and given the recent trends in sector it is evident that plastic pipe is the fastest growing segment in overall building material space with huge runway for growth. Industry is consolidating and larger players continue to see good times. Though it looks like a simple business at first glance, it is not easy to scale which is a key requirement for good profitability.

We believe the sector has long term tailwinds and will have big winners. Our findings reinforce our bullish view on the sector.